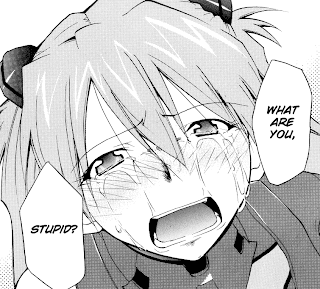 Any questions, comments and such can be directed to anonspore@gmail.com. I can't guarantee I'll respond in a timely manner (or, for that matter, even respond at all) but I'll do my best. Hope you enjoy some of the stuff here.

Anyway. You can find most of the stuff I did here: Mediafire!

-Do you want help? Are you looking for editors/translators/cleaners/typesetters/QCers/slaves?

No. To expand, and answer a pet peeve at the same time: No, I work alone. I am one person. I am not a scanlation "group." By and large, I find it easier to work alone, being both very impatient and an incredible control freak. It's not you, it's me. That said, if I ever need help (and I have, several times in the past) in regards to anything I feel is beyond my own meager ability, I will ask. Such cries for assistance will commonly be found under the status report label. Particularly pathetic cases may be relegated to abject groveling.

On the other hand, if you have criticism and/or ways you think I could improve, I'm all ears. Please don't hold back for fear of hurting my feelings; I won't keel over and die at the first mention of something other than blind praise. I value the opportunity to get better more than any number of "omg thx."

If you're willing to work for little to no recognition, and are supremely confident that you're both 1) faster, and 2) better, at editing/cleaning manga than I am, and for some unknowable reason also want to help me instead of doing something infinitely more productive with your spare time, feel free to drop me a line.

I wish I could say yes. I have a ton of series I would like to work on, outside of the ones I'm doing now. Sadly, though, I work alone, and therefore there is only a certain amount I can do on my own without burning out and disappearing for extended periods of time, as I have done from time to time. As you can see below, I already have quite a backlog, of things I'd like to work on but don't currently have the time to. If, in the future, I ever get done with all of that, then maaaaaaaaaaybe. But not likely. If you still think that it's a work for the ages and for some unfathomable reason think that I should be the one to do it... Well, toss me an email and we'll talk it over.

-Will you ever do more of Nisioisin's -monogatari series?

Sadly, probably not. For one thing, the proliferation of spoilers on the untranslated novels really cuts into any motivation I might have had. I know it can't be helped, but I'm an illogical being with illogical quirks. Also, my favorite character is Kanbaru Suruga, and her novel (Hanamonogatari) revealed several character quirks that disappointed me immensely. The latter is a larger cause than the former. Besides, other people seem to be working on those just fine, so... yeah. Sorry.

-Will you be doing Bambino! Secondo?

Long answer: Noooooooooooo Sorry, but I really don't have the time to put into an ongoing weekly series that has no end in sight. Maybe later. I don't regret doing Bambino but it's definitely proven to be a lot more taxing on me than I thought it would be going in. I come out of it a wiser, lazier Spore, and one of the lessons I've learned from it has been that I'm not cut out to do a weekly series.

If anyone wants to take it from here, you're more than welcome to do so. I don't believe in scanlators "owning" series.

-Do you mind if I use your translations for (insert purpose here)?

Absolutely not, go ahead, do anything you want. My translations become public property the moment they go up on the internet. If you want to use them to do translations into another language then be my guest, though I recommend you only do that as a last resort--double translation is so unreliable.


Some of you might be interested in some of the other series I've worked on in the past. Bad news: I'm not working on any of them anymore. Good news: Other people are.

Eyeshield 21: Finished, by various scanlation teams. Can be found at pretty much any online manga site.

Neon Genesis Evangelion RE-TAKE: Finished, by me, re-edited and re-translated (I hadn't watched Eva in years when I first did it) with All Ages version raws. Can be found here.

Slayers light novels: Abandoned. I'm sorry, but Kanzaka's writing style is just ridiculous to get right considering it's pretty much a manga in written form, and I have to admit that Slayers REVOLUTION and EVOLUTION-R discouraged me immensely.

Genshiken Nidaime: Kodansha apparently doesn't want me doing it anymore. You can find what I did on Batoto and also on Mangatraders to download.

Black Lagoon: Ballad of the Sinful Wizard: After the current Baccano! arc.
Seburikkang


Other bits and pieces I've done over the years were done anonymously and I think I'll keep it that way.


As you can see, my track record is dismal. Told you I was lazy.