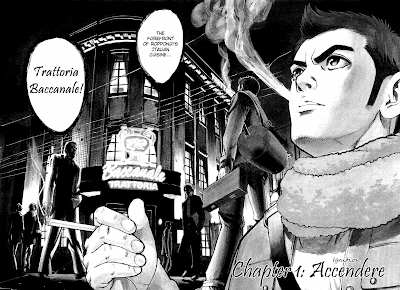 This is probably one of my favorite manga. It's about cooking. Not THIS TASTE IS DESTROYING THE EVIL INSIDE ME or THE LEGENDARY GHOST FISH, SAID TO SEND THOSE WHO EAT IT TO HEAVEN ala Chuuka Ichiban (Cooking Master Boy) or Shota no Sushi. Just the life of a line chef at a busy downtown restaurant.
The main character is Ban Shogo, a college student from Fukuoka who likes to cook. Thanks to the owner of the restaurant where he works part-time, he finds himself working at the line of Roppongi's best Italian restaurant, Trattoria Baccanale, and discovers that the real deal isn't quite as easy as he'd thought. The manga follows Ban as he struggles to keep up with the hectic workload and his co-workers, along with issues outside the kitchen like his relationship with his girlfriend Eri, who he left behind in Fukuoka.
There's a lot of Italian in this manga. The original Japanese used katakana with the meanings written above them in furi, and I've tried to reenact that in English. It might be a bit clumsy because it's my first time trying to use two languages in tandem, but we'll see how it goes. I don't think it's that confusing.
Ban and the rest of the characters from Fukuoka speak in a peculiar accent (Katori-shan is not a typo) but I eased up on it in the process of translation in order to help with readability. It's not quite Kansai-ben, but... if anything, it's close to that, I guess. If you will, imagine Ban's accent as a bit of a country drawl.
Thanks to Hox for finding me the raws, though I can't say I don't wish they were a bit bigger.
at 4:36 AM