Fun Fact: Kanbaru Suruga spread a rumor amongst the girls of Naoetsu High that Araragi Koyomi can make breasts grow by fondling them. 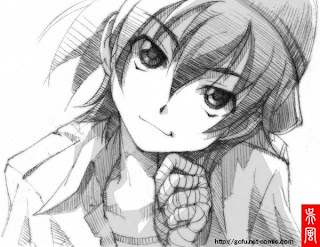 That boyish charm...  √(‘∀` √)
More Kanbaru and Arararararagi, continuing where we left off from the second part of Nadeko Snake here.
Exercise in limited localization. ┐( ￣ー￣)┌
I ended up doing a bit more than I expected. Oh well.
d=(´▽｀)=b ｨｪｰｨ♪

I would pay good money to have Kamiya and Sawashiro say some of these lines.
---


"I'm a little embarrassed to have to point out that kind of error, but it's pretty rare for someone to pick the wrong synonym to use in a sentence like that..." 6)
Mmm...
Araragi Koyomi Image Tarnishing Project failed!
---
That seems like as good a place to stop as any. Anyway, despite my best efforts I had to leave no less than six notes, so here they are:
1): Kanbaru says that she would follow Araragi through fire, water, metal, earth and wood: the five Chinese elements. The kanji for metal is 金, which is the same as the kanji for gold, which is what Araragi is referencing when he says it wouldn't be so bad.
2): Kanbaru prepared lunch in compartmentalized lunchboxes called juubako (重箱). The first kanji, juu, can mean stack (重ねる) and also heaviness (重). Araragi is making a pun by saying that the kanji 重 in juubako "stacks" the weight of his guilt and makes it even "heavier."
3): What Araragi thinks here is actually sugaruotome (蜾蠃乙女) which is an old term for a curvy and attractive girl. The pun he makes afterward is in reference to the similarity between sugaru and Suruga.
4): Ragiko is written as ラギ子. When added in names, the ko kanji is often used for girls' names (Ryouko, Kyouko, Aiko, etc).
5): Kanbaru's actual comment is that she always thought gumon (愚問), which means "foolish question," stood for "Good Morning." A bit of a stretch in the localization, but eh.
6): Kanbaru says that she might not have what it takes (yakubusoku; 役不足) but erroneously replaces yaku (役) with yaku (約). Araragi points out that she used the wrong kanji. How he knows this is anyone's guess.
at 12:59 AM